From EEWiki
(Redirected from Portals)
Jump to: navigation, search

Portals are stackable action blocks that can be used to teleport between areas in worlds. The ID of the portal can be changed to teleport to different portals within a world. When a player in God Mode flies over one, a player can see the portal's ID and target ID.

Portals have two properties: ID and Target; the ID is the number that recognizes that portal, and the target is the numeric ID of the new portal you want to lead to.

Pop-up that appears when you click portal in Action. 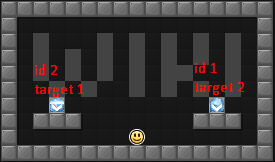 Two portals that leads to eachother.

The normal type of portal is the blue one, it has no special effect other than teleporting.

It acts as a normal portal, except it is invisible. It becomes visible while god mode. Invisible portals share the same ID namespace as visible portals.

The World Portal was added on February 27th, 2013. Unlike the other two types of portals, the world portal can send players to other worlds, including ones that were made by other people. The world ID, which is the random letter sequence in the URL when "Share Level" is clicked, can be changed to send players to different worlds. Also, the portal requires tapping Y (formerly Space) for to activate, instead of activating on contact.

Pop-up that appears when you click world portal in Action.