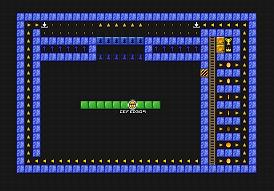 Bosses are a type of interactive level that can be considered live puzzles. They feature competitive play between players.

In a Copy Smiley boss, the playing field is normally arranged so each player has their own area to sit it. When all of the areas are filled, the owner or the person who is 'bossing' will change a smiley that everyone has to copy. Normally there would be a certain amount of blocks under each area representing how many 'lives' each player has. The last person standing gets the prize.