From EEWiki
(Redirected from Common Puzzles)
Jump to: navigation, search 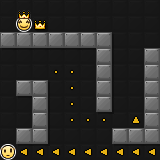 Common Puzzles used together in a room

Puzzles in Everybody Edits are player-originated challenges of varying difficulties. Together they form minigames (Minis) and entire rooms can be made out of them, called Minigame levels, but normally they are used for fun to keep players in room or as a challenge to award more skilled players. Because of that they are often used in boss levels.

These are common puzzles featured in Everybody Edits:

Wiki tip: Click on images to see them in full size.

Some types of Hook Jumps

The Hook Jump also known as C-Jump or Ninja Jump appears in many variations and directions (With help of gravity arrows). It consists of any solid block with another solid block placed two or more blocks above.

They are usually accompanied by a wall to one side (as pictured), Jumps with this wall are considered easier as players can fall from standing area only from one side, but they can also jump only from one side. Sometimes there is also another wall placed two bricks to an open side of the Hook Jump, Jumps which have these walls are considered easier because players can't jump too far from Hook Jump.

Sometimes level creators place an action block such as gravity dot, arrow or hazard[2] on the block where the player stands to attempt to make it more challenging, but if they place 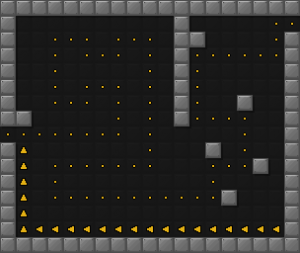 Dot Trail with helping blocks (right) and without (left)

Dot Trails, also known as anti-gravity rails, consist of gravity dots chained together. The length and difficulty of the trail varies depending on the level's designer, as well as the complexity.

At times, it is possible to bypass lengths of the Dot Trail if the design permits.

Sometimes level designers add a solid block beyond the edge of an intended direction of travel to make it easier because it prevents the player from flying off carelessly, as the player is squared with the next line of dots.

The best way to pass them is to quickly press direction pointing end of current dot line, and if you accidentally go too fast press opposing arrow to go back. Repeat this until you are squared with another dot line and repeat same technique until you finish.

Before, Tight-fit puzzles were much more tedious to complete since smileys had to be in the exact position before being able to successfully jump through a Tight-fit hole. However, one of the updates added a feature called grid-locking, it automatically aligns a smiley to the grid if close enough to a grid square. This made passing these puzzles much easier. Once you can fit, you have to time your jump and movement correctly so you don't end up moving after the jump; losing your place and forcing you to start over.

Easier variations of this include:

Harder variations of this include:

Example of Tight Jumps; To beat last Tight Jump player must get acceleration from white block 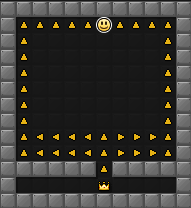 There are multiple variations of this (Also in all directions) and they are similar to Tight-fit, this puzzle needs you to drop from a height into a hole, and if you miss there are usually arrows to carry you back. Even though anti-gravity dot will make this puzzle harder, many people use arrows instead. Template:Clear

Mazes are puzzles where player has to find the way out by themselves and they appear in a few different types. Template:Clear

Stairs are made out of any key locks stacked like stairs that ascend a tower, ultimately reaching the top of the stage. At the top the only way to pass to another part of the world is to go through a key in an opening, which will dump any unsuspecting players down to the bottom or safe spot. Solid bricks are normally added near the walls to be used as safe spots or to catch falling players.

High Jump is a puzzle that consists of a wall that is 4 or more blocks high. At the bottom it has an arrow or a dot, for high-jumping. They are considered hard and boring because they require precise timing and are really affected by lag but can be learned over time. Walls that are 6 or more blocks tall require multiple arrows facing upwards and they require the same method. A single block ceiling is often used for when multiple High Jumps are placed next to each other to prevent players from jumping from the top of one to the top of another. Template:Clear

Elevators are made out of alternating lines of spaces and arrows facing upwards. Players have to move left or right while traveling because if they get out of elevator for just a moment they will start falling all the way to the bottom. They often branch out into many different paths. 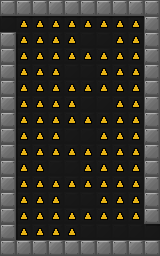 Reverse elevator with up arrows on top[4]

There are also reverse elevators, they are same as normal elevators but with opposite direction (from top to bottom), they usually contain action block such as hazards, water or lava, boosts or arrows which you must avoid. Another type of reverse elevator is when it has up arrows on top attached to solid blocks, making pushing away against arrows roughly the only way to get to the bottom. This way it is similar to Anti-gravity drop except you have to move while falling as well. Template:Clear 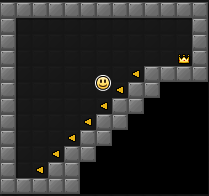 An Arrow Tower consists of stairs with one arrow facing against you on each step. The easiest way to beat this challenge is by holding space and the arrow of the direction you want to go in. Template:Clear

Side-fits are usually used in boss levels. The goal is to step off the top block and fit between both before the boss pushes you off with arrows. The simplest way to complete these is to lightly go off the top block and to directly press the opposite arrow when you start falling. Template:Clear

Coin Puzzle where you have to go first to two, then three, then four and then five to solve it.

Similar to Coin Maze, a Coin Puzzle is solved by collecting coins in the right order except it's more of parkour type than maze. Owners usually add reset block in case you mess up.[5] Template:Clear

Diagonal Dot Line, as name says, is line of anti-gravity dots placed in diagonal order. It's not common in most minigames because it's hard and it takes too long for beginners to pass it. In order to beat it players must start holding up and press right/left directions repeatedly but with good timing. Another but harder way is to hold up and press right/left direction when you start moving upwards. Template:Clear

Hover (Gap Slide, Single Space Jumps...) is very difficult mini and can be completed by moving slowly across the gap. It can be used to trick rushing players into falling into the gap. Template:Clear

Bouncing Gravity Climb, as name says, is a challenge where you have to climb by bouncing against gravity arrows. There are many different variations of this depending on creator and their difficulty can vary a lot, your reaction of movement also depends on how you start climbing. Most of them are very hard to beginners but can be quickly practiced. Template:Clear

Duck Jumps consist of 1 or 2 solid blocks on bottom, empty space above it and arrows above empty space. They are common challenge found in easy minigame levels. Template:Clear

Wall Jumps require players to jump from one wall to the another by pushing off the gravity arrows. To do it you must jump with enough speed and hold direction opposing arrows you are standing on[6]. Their difficulty varies depending on number of arrows and distance between opposing arrows horizontally and vertically. Template:Clear 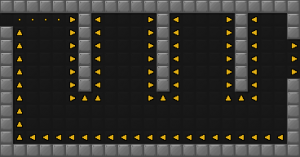 Stalactites; Note the different variations of their tip (arrows)

Stalactites[7] are common puzzles found in many minigames. They are lines of solid blocks hanging from top with gravity arrows sticking players onto it. When players get on other side they need to jump to another Stalactite (Similarly to Wall Jump) and so on until they get to the end. Their difficulty depends on variation. Template:Clear