From EEWiki
(Redirected from Woots)
Jump to: navigation, search 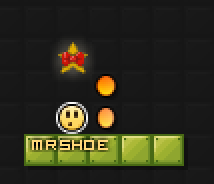 Woots were stars with red bows located at the center. Initially, there were two types of Woots with different functions: 1) World woots 2) Magic Class woots[1].

If a player wanted to, they could give any world a Woot. Players had maximum of 10 Woots and would receive 10 more Woots every day. In the lobby, worlds could be sorted by the amount of Woots they had so people often put fun and entertaining things in their worlds to encourage people giving Woots.

Still not confused? When Magic Classes were firstly implemented, a Woot would appear above players. However, to prevent confusion, it was renamed and reanimated into Magic Coin.

Two different kinds of Woots with similar, but not the same function, caused some confusion for newbies and thus magic coins replaced magic Woots. However, world Wooting concept was still present. As of August, 2015, the Woot system was removed in favor of a Likes & Favorites system.[2]